The House
Hotel Snæfell is a three-story wooden house built in 1908 situated by the mouth of the river "Fjarðará". It has beautiful views over the small bay in the center of town. This natural estuary is home to birdlife, trout and the occasional Atlantic Grey Seal. The house was first used as the local post office and then in 1943 it was turned into a hotel.

Through the years it has played many a role. A shoemaker workshop was there for a few years also the taxi station and a large restaurant. The house also served as a home to several families before becoming a hotel. Among many of the people living there was Ingi T. Lárusson one of Iceland´s foremost composers.

The Rooms
The house was renovated in 2007 and a lot of effort was put in to storing the rooms to their original charm and state. In 2013 three new rooms were added on the ground floor: these rooms are more spacious and modern and therefore we dub them "superior".
Gamli Skóli
from 27,900.00
Book Now

The House
Situated in the old town center, "The Old Schoolhouse" houses 2 apartments for up 6 persons each. Both are fully furnished with a washing machine and a dryer. Built in 1883, the house was originally used as a school. Book for a homey feeling!
Bankinn
from 14,900.00
Book Now 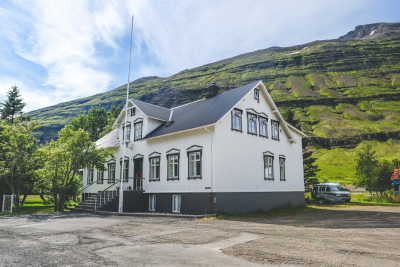 The House
Hotel Aldan used to house the bank of Seydisfjordur for almost a century and before that one of the best hotels in Iceland. All efforts have been made to preserve the historical atmosphere while adding modern convenience.
In 1898 the hotel had 19 rooms, one serving as a dancehall and a dining room. Since the hotel has been restored to it's former splendor we now offer 7 double and 2 triple rooms.

The Rooms
In most of the rooms there is space for an extra bed and furthermore, it is possible to arrange accommodation for a family of five persons in one of our rooms.
Due to the flexible architectural layout, several rooms can be combined so they either form suites or family rooms for 4 to 6 persons, without adding any extra beds.